In order to have a bucket within a bucket cut the upper top of off first IBC right at the curve tough that one IBC is open. 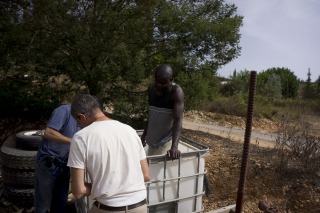 Lif the second IBC out of its metals cage. We just need the plastic container.

We need a hole for the water inlet so that gas could push out the water. Drill a 3" hole on top of of the second IBC on the short side. 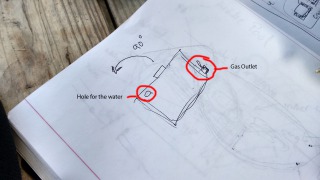 Seal the cap using Silicon. Make sure it is airtight.

Lift the second IBC (the one without the metal cage) and put it inside the open IBC.

Cute the open IBCs sides. Make sure that the second IBC can easily slide up and down. 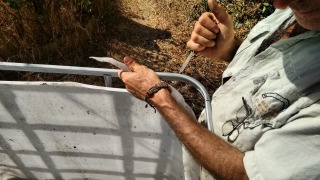 Once the second IBC can be lifted easily attache the gas inlet. This could be a hose that sits on the bottom of the open IBC and inside the second IBC.

Fill the cutted IBC with water and let the other one emerge into it. This will take some time.

We are now creating the gas outlet. For that we are using the standard outlet of the emerged IBC (now on the top). Connect the reduction and the valve to the second IBCs standard outlet. Make sure everything is airtight.

Once you have the gas pipe (hose) connected use a palatte on top of the second IBC and some sand bags or whatever you have in place for weight. 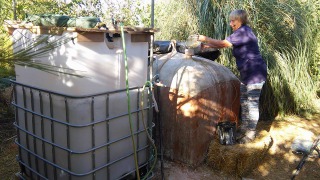 by Martin Funk: Cut for the floating drum one side of the IBC complet.

To keep the floating drum in shape use a wire from one side to the other. 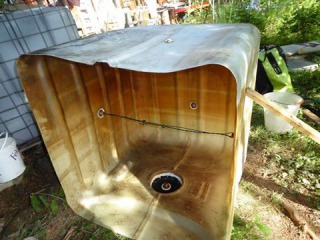