The IBC (International Bulk Container) is an easily obtainable polypropylene tank that is ideal for turning into a  1 m³ digester. Solar CITIES innoventors T.H. Culhane,  Hanna Fathy and Mike Rimoin pioneered the use of used globally available IBC tanks for biogas systems in Cairo, Egypt in early 2009 and Solar CITIES has since built and led workshops and made improvements on these systems all over the world, building on porches, rooftops, backyards, laboratories and even basements of single family homes.  We recommend using two IBC tanks in parallel to ensure good activity and useful quantities of gas throughout the year.

I think its hard for most people to appreciate how easy it is to build your own home biogas system.

Perhaps we want things to be more complicated than they are in order to somehow justify the suffering we've had to endure all these centuries trying to live without domestic biodigesters.

Or perhaps we've simply kept the simple engineering principles out of the hands of the right people – women and children particularly – people who would intuitively understand that the wastes from our kitchens and bathrooms can complete the growth cycle and become soil and food and fuel once again, and would realize that all we are really building is a stomach with a mouth and a throat, an anus and a ureter. This biomimicy is easy to understand if you think of a biodigester as a baby, or as an animal – a fire breathing dragon if you like, rather than a machine.

But it is simple.

Here's how you do it, the Solar CITIES Open Source Way:

Step 1: Get yourself an old IBC tank – an International Bulk Container. You can find these used IBCs, these pallette based 1000 liter plastic shipping containers, literally all over the world.

Step 2: Take a 3 inch hole saw and drill three holes in the top of the tank as shown. If you are in a place with no electricity and no power drill, take a piece of metal pipe with a three inch diameter and heat it up and melt the holes through the plastic. We did this in the Dominican Republic with a three inch metal sink strainer. Three inches is 76 mm for those of you doing metric. This is the diameter of the outer flange of the 2 inch uniseals we use.

Step 3: Next, get yourself 3 two-inch uniseals, grease them up with plumbers silicone and pop them into the holes.

Step 6; Designat the second of your three pipes as the gas outlet pipe and cut a hole so that it will be just below the top of the digester when inserted through the second uniseal and pushed to the bottom. Yes, you'll have to measure this one as the heights of your IBC can vary. You can do this by putting the pipe in the hole before you put the uniseal in and making a mark with a permanent marker about 2 cm below the place where the top of the tank touches the pipe. Make sure you sand the edges of this hole smooth and flush so it doesn't cut or get stuck on the Uniseal on the way down. Then push the gas outlet pipe into the tank through its uniseal. We like to put the feeding pipe and the gas outlet pipe on the same side of the digester as we find that is where most of the food settles and most of the gas rises and collects.

Step 7: Designate the third of your two inch pipes the slurry or effluent pipe where the rich organic liquid fertilizer or “compost tea” will exit. We cut a hole in this last pipe (Make sure you also sand the edges of this hole smooth and flush so it doesn't cut or get stuck on the Uniseal on the way down!) so that when it is pushed down to the bottom through the uniseal the hole will be somewhere near the middle of the tank. We do this because bioactive solids are being digested at the bottom of the tank – mostly carbs and protein, while lipids, oils and fats will rise and be digested at the top of the tank – and we don't want to remove feedstock that is still energy rich. By placing the outflow pipe on the opposite side of the tank, diagonally across from the feeding pipe we maximize the “hydraulic retention time” of the feeding material – that is, the time it spends being digested in the tank – so we can win the maximum amount of energy from it. Since our digesters are a kind of “plug flow” digester, the food we push in one side of the tank is slowly shoved to the other side of the tank when new material is added. But the fertilizer we force out with each feeding has had the best opportunity to get digested, and because we draw it from the middle of the far end of the tank it comes out as a liqued that is nitrogen and nutrient rich but doesn't clog pipes. The sludge can stay in for years and years and only rarely needs to be pumped out to make a solid compost.

With these three pipes in place you are basically done with the digester. The rest is plumbing.

Step 8: First, we want to take care of the gas outlet pipe. The two inch pipe sticking up above the digester ensures that the gas outlet is well above the water line and is wide enough that manure or other solids you may have put in to inoculate your digester don't clog the pipe and stop the gas from coming out. At the top of this pipe we put a 2 inch to ½ inch PVC reducer, a half inch PVC ball valve, an elbow, and a ½ inch barbed hose connector. We don't glue these on in case we ever need to remove them to clear any possible clogs should they arise.

Step 9: For the fertilizer outlet pipe we first cut off about 5 centimeters and then attach a 2 inch T, a piece of 2 inch pipe, a 2 inch elbow and a drain pipe leading to the fertilizer bucket. Every time you add ground up food waste and water to the system from the feeding end an equivalent amount of bioslurry will be forced out, because the 90 degree part of the T is lower than the feeding pipe so whenever it is filled the fertilizer pipe will over spill and drain into the bucket. The open sky facing part of the T ensures there will be no vapor lock – otherwise you will get a siphoning effect, such as we experienced when we built one with an elbow instead of a T in Swaziland. A siphon will drain your tank in no time! But with a T the system automatically regulates.

The fertilizer that results is perfect for hydroponic and aeroponic gardens, diluted with grey water 10 to 1. You should never have to buy fertilizer again.

Step 10: Finally we put a funnel onto the feeding pipe where ground up kitchen scraps – old banana peels and plate scrapings and whatnot – are poured. Unlike most compost piles here is no food waste you can't put in – fruit and vegetable rinds, cooked food, meat and grease, you name it. You just have to grind or mash it up and mix with water – dirty or soapy water is fiine – so that it will fit down the pipe without clogging.

In the Dominican Republic we used 5 gallon water jugs cut in half as our funnel. If you build your digester lower than your sink and install a food grinder, hook up the oulet of the grinder directly to the feeding pipe – just don't forget to have a pipe or hose attached to a T to prevent a vacuum lock.

Of course this digester doesn't store gas, so for that you will need some other form of storage. We tend to use PVC balloons or bladders, basically plastic bags, connected to the tank with cheap clear plastic tubing. They work just fine. In New York we've built these digesters in two family basements and the gas is stored outside in the bags with a T line connecting the output to the kitchen stove Yes, biodigesters are perfectly safe to use in the home. And they are generally odorless if fed correctly. But if you do want to ensure there will never be any smells emanating from the pipes, pour a thin sheen of vegetable oil or citronella in the feeding and outflow pipes every couple of weeks, and lightly cap them .

Additional work for placing it outside

If you are building your digester outside there are a couple of things to finish up. If you are in a hot climate, paint your digester black. For one thing the digesters are animal stomachs with the same microbes that live in animals doing the digestion and they need to be kept at body temperature. The sun will heat up a black digester and help keep it warm. For another thing, the microbes must be kept in the dark – if light gets in your digester (which it will through the white plastic of the tank) algae will grow in the tank, produce oxygen and kill off your anaerobic archaea. You'll get lots of gas, but it will all be carbon dioxide. So the tank should be opaque.

If you are building your Solar CITIES digester outside in a cold climate you need to insulate it. We've found that cheap styrofoam and stretch wrap can work okay if you put enough layers, but you are best off if you can get the thing foam sprayed. And in really cold climates you should insulate and put into a greenhouse and put pex heating coils inside connected to a source of hot water like a solar heater. But that is the subject of another tutorial.

If your IBC tank has a screw cap with a threaded opening in it, you will usually be better off creating your gas out pipe by simply screwing the appropriate sized PVC pipe into the lid, making sure it is taller than the effluent out pipe before you reduce to the 1/2 inch gas valve.

We hope you will join the Solar CITIES evolution to make the benefits of biogas affordable and simple for everyone. It really is easier than you'd think. So please, DO try this at home!

What is the difference

What is the difference between and IBC and a Solar CITIES IBC?

Biogas is the real deal.

I have a small big biogas power plant that I'm feeding with organic waste and making electricity out of it. It's pretty nice and it saves my energy bills up to 30%. If you're thinking of DIY your own backyard bioplant and especially if you're going to produce electricity, there's no better blueprint online than biopowerplant. You will need to have a two small barrels. One (digester) is where the animal, human and other organic wastes are introduced, usually as a slurry with water, to break down anaerobically. The other one (storage container) is used to hold the gas produced, from which it is piped for burning as a fuel. When the digester is emptied, the spent effluent is dried for later reuse as a fertilizer. Most of the things you need you probably already have somewhere around your house or you can get for very little money.

Hi Greg,
the biopowerplanet.org link leads to a company that wants me to pay for the manual, and the blueprint is not available anywhere on the site for free...

There is a manual for the Gasstorage with 2 IBC Tanks available.

Please try to do this at home! 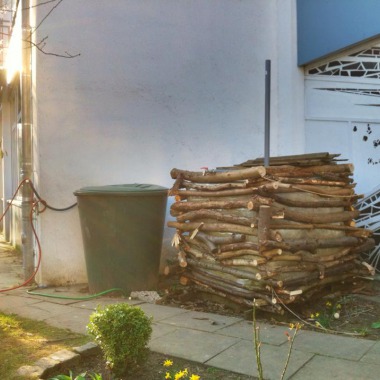